I don’t do a lot of nighttime photography these days but where I have my desk set up for working from home during these times of isolation, I have a wall of prints of some of my favorite images.  Two of these images I have mounted as a pair and I often look up at them as I am pondering an issue.

These are the two images and I am pleased with how they came out; I like the way the street lighting highlights the scene with the shadows towards the edge of the frame adding an air of mystery to what may be beyond.

The first shot was an unplanned moment (as most of my photos are) where I was walking around the neighborhood near where I was living at the time looking for interesting views. When I took the shot I didn’t think it had worked as I had envisioned and even when I got it back to my computer I almost overlooked it as a photo.

The second was slightly more composed; I was staying in an apartment block in Canada and I could see this store front way below.   I needed a pretty long zoom to get this framing and it took a few shots to get what I wanted. I really like both of these shots;they have a certain ‘mood’ about them and I think they go well together..

In looking at these two shots and thinking about making a post about them I pulled out these other night shots shots from my archive.

These were taken last year and are all from the same place. We had a visitor coming from out of town and we went to Union Station in LA to pick her up. Unfortunately her train was delayed and so we had to wait a while for her to arrive. I say unfortunately, but this gave me the opportunity to grab my camera which on that day was my wonderful Voigtländer Prominent and wander around the station.

I am never disappointed when I have time to shoot around this station it has lots to offer a photographer like me; interesting architecture, shadows, people etc.

I was using Ilford Delta film and this shot which is one of the ramps up to the platforms caught my eye; I likes the way the lights played on the walls and the leading lines into the unknown destination

At one end of the station is an area with a large vaulted circular ceiling. These three windows are high up on one of the walls and I liked the shadow play from the bright lighting. I think the Delta film handled this range of tone really well.

This last image is from outside the station at the rear. I like the dramatic lighting and the sense of scale in this image. In my mind it has hints of Metropolis and Film Noir about it 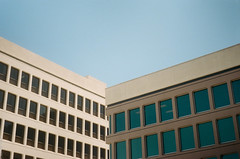 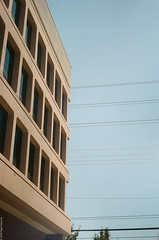 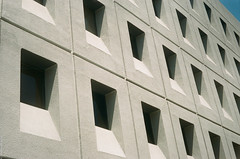 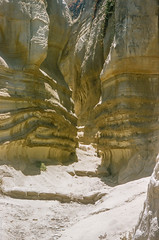 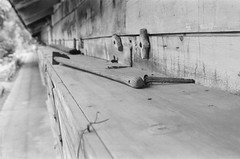 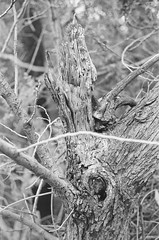